First name Action. Second name Dude. The hero (who most definitely does not answer to Charlie) that lives for danger, specifically non-spider-related danger! While he might fumble a minor errand or dodge chores, when the robotic inhabitants of the local theme park – Prehistoric Land – go berserk, he’s the nine-year-old for the job.

When head engineer Jeff Lucas ‘flips out’ and transforms the friendly robot prehistoric people, sabre-tooth tigers and mammoths into angry, aggressive monsters, Action Dude must rescue the trapped visitors and save the day. Mayor Margolis is a fan, Police Chief Nina is less so, but sometimes a kid with a can-do attitude is exactly what’s called for. Assisted by Ruby, queen of the hard stare, and the rather pointless Callum the engineer, Action Dude heads through Prehistoric Land, buoyed up by plenty of confidence and a few lucky breaks.

The knowing humour in this graphic novel, with its relatable dialogue, genuine comedy and striking art style, will appeal to confident readers. Short chapters and plenty of action maintain the pace, and the familiar video-game/action-movie tropes are imaginatively reworked and will interest more reluctant readers.

Andy Riley, author of the King Flashypants series and writer for television and film, showcases his skills with engaging characters, entertaining twists and a respect for the intelligence of the reader. This is a great addition to the growing selection of clever graphic novels that will appeal to fans and win new ones. 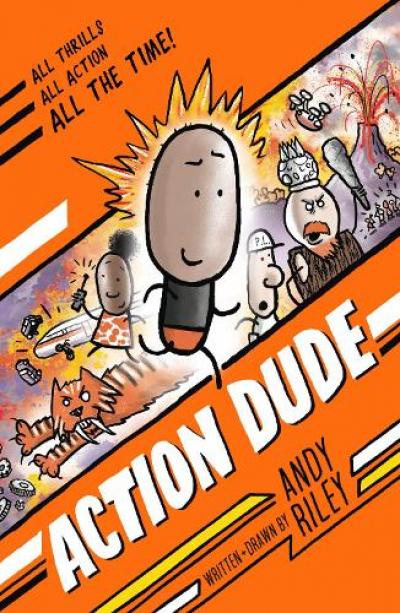 Sherlock Bones and The Case Of The Crown Jewels