At first glance Aquarium looked a bit like it was all fur coat and no – ahem– underwear. Created by a young Argentinian graphic designer for readers of 3 to 5 years, it looked too design-led with not much else going on. But first glance was wrong; the underpinnings in this stylish wordless picturebook are considerable. And at first glance there doesn’t seem to be much happening in the story: a little girl runs to a lake or sea where she plunges into the water.

There she encounters a friendly red fish which she pops into her water bottle and takes home. Lengths of tubing, jugs, bowls, basins, vessels of all kinds populate the floor as she constructs an aquarium for her new fishy friend, but it doesn’t seem right. Perhaps red fish would like to swim with her in her paddling pool, but that doesn’t work either. Fish are meant to be in open water, and that’s where she runs to pop it back in its natural environment.

This is where Alonso’s superb design comes in; she gently shows her readers how the girl learns by experiment that fish need to be where nature put them. Rendered in pen and pencil and digitally manipulated to create a flattened print-like effect in cool tones, the images span a series of vertically shortened landscape spreads showing the protagonist’s realisation that in spite of all the apparatus used to set up an aquarium, a fish wants to do what it is best at – swimming in open water. Attentive readers (children) will note that the opening endpapers are patterned with water-filled containers containing fish, but the closing endpapers show the girl and the red fish happily swimming in an expanse of water.

Close attention to detail in the telling of a gentle but significant story makes this a book that will be looked at, talked about and enjoyed by children and adults time after time. 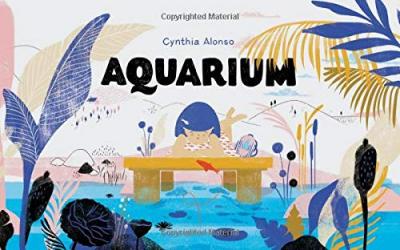 And Everything Will Be Glad To See You: Poems by Women and Girls

All the Animals Were Sleeping

Five Bears: A Tale of Friendship

A Perfect Wonderful Day with Friends