With the opening lines on the front cover, this story dives headfirst into the filth and desperation of life in a refugee camp. The location, like the narrator, is unnamed, but evokes the Calais Jungle where thousands of migrants camped from 2015 until its demolition a year later.

Child I is one of the unaccompanied minors named after a letter of the alphabet ‘so that the guards can keep track.’ From scavenging for food to trying to keep clean in the mud – a feature so ubiquitous it’s almost a character – the grime of camp life crawls under the reader’s skin. But amid the misery comes hope in the friendship between four children and the compassion of adults such as Charity, a volunteer who feeds and clothes them in the bus she drives around the camp.

This simply written book has some clever touches, such as the rearrangement of the children’s initials for each chapter heading: LIVE, VILE, EVIL and, when a fifth child O joins the group, LOVE. The no-nonsense narration intensifies the horror of scenes such as Child I’s confrontation with a stork while wading through the camp rubbish tip. The bird’s beak and the child’s knife fight in a ‘click, clack, clang of a dance’ until the stork lunges and the boy falls face down in the mud.

In Child I, Tasane tells a crucial but little-covered part of the refugee story: not flight but arrival and survival at a temporary destination. A valuable, deeply moving read. 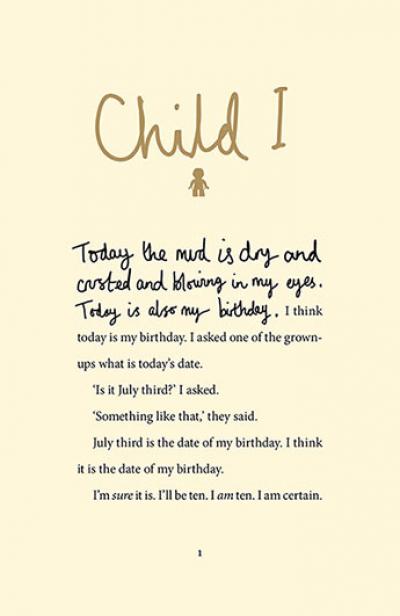 No Place for Monsters

The Day I Got Trapped in My Brain